Playoff Droughts As of Fall 2013 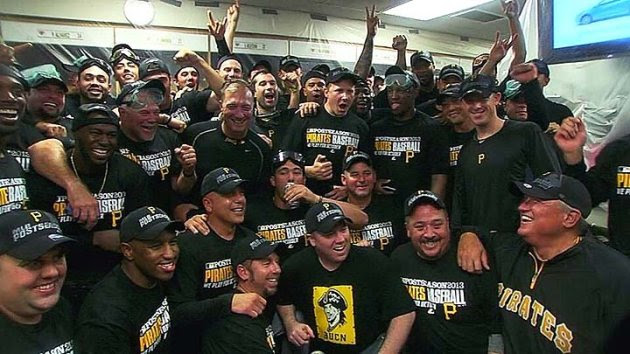 The Pittsburgh Pirates clinched a Playoff berth last night. So did the Cincinnati Reds.

When I was a kid, neither of these occurrences would have been considered a big deal — outside their markets, anyway.

Even now, the Reds making the Playoffs isn’t a big deal, as they’ve now done it in 3 of the last 4 seasons.

But the Pirates hadn’t made the Playoffs since George Bush was President.  The father, not the son.  September 1992.

How long has it been? Well, since I just did a “How Long Has It Been” piece for September 1992, on the last time the Yankees were this weak (or worse), you can check that out.

The Pirates’ management finally figured out that 20 years of being cheap wasn’t working.

The Pirates had the 2nd-longest Playoff drought of any current team in North American major league sports.  When it came to how recently they’d made the Playoffs, they were 121st out of 122.
(That counts MLB, the NFL, the NBA and the NHL — but not the WNBA, MLS, or the Canadian Football League.)

Last made their League’s Playoffs in 2013:

1999: Buffalo Bills.  They haven’t made the Playoffs in this current century.

1985: Kansas City Royals.  They got close this time, and haven’t officially been eliminated yet, but they’re 3 games out of the 2nd AL Wild Card slot with 6 games to go.  They haven’t made the Playoffs since the Reagan years, since portable phones were the size of a tape dispenser, since a desktop computer took up the entire top of your desk, since people were actually devoid enough of taste to listen to Duran Duran.

By City -- this time, I include all 4 major North American sports where I can:

Pittsburgh: 2013 Pirates and Penguins, 2011 Steelers.  The city has only once made the Playoffs in basketball in anything resembling "major league": The 1968 ABA Champion Pittsburgh Pipers.  The Pittsburgh Ironmen (whose best player was Press Maravich, future LSU coach and father of Pistol Pete) were charter members of the NBA in 1946-47, but that's Pittsburgh's only season in the NBA.

San Antonio: 2013 Spurs.  Aside from the Saints' temporary stay at the Alamodome due to Hurricane Katrina in 2005, San Antonio has never had a team in any of the other major league sports.

Indianapolis: 2013 Pacers, 2012 Colts, 1914 Hoosiers -- their only MLB team won the first Federal League Pennant, lost money, and moved to Newark (actually Harrison, their stadium was catty-corner from the current site of Red Bull Arena).  Never had an NHL team, made the WHA Playoffs with the 1977 Racers -- oddly, naming a team in one sport after another sport.

Memphis: 2013 Grizzlies.  Didn't make the NFL Playoffs when the Titans played there in 1997-98, but made the USFL Playoffs with the 1985 Showboats.

Oklahoma City: 2013 Thunder.  Unless you count the USFL's Oklahoma Outlaws, who played the 1984 season in Tulsa, the Thunder are Oklahoma's only major league team ever.

Ottawa: 2013 Senators.  In 2014, the Ottawa Redblacks will join the Canadian Football League, taking the place of the Rough Riders, who went out of business in 1996 and last made the CFL Playoffs in 1994.

Baltimore: 2012 Ravens and Orioles.  The Bullets made the Playoffs in their last season in Baltimore, 1973.  Baltimore has never had an NHL team, and their sole WHA season, 1974-75, the Claws did not make the Playoffs.

Seattle: 2012 Seahawks, 2001 Mariners.  The SuperSonics last made the Playoffs in 2005 before moving in 2008, and the Metropolitans, Champions of the Pacific Coast Hockey Association in 1917, were the first American team to win the Stanley Cup, last reaching the postseason in 1924.

Regina: 2012 Roughriders.  (The "Saskatchewan" club has always spelled "Roughriders" as one word, the defunct Ottawa "Rough Riders" as two.)

Orlando: 2012 Magic.  The Florida Blazers, playing all their home games in Orlando, reached the World Football League title game (the World Bowl) in 1974.  That's Orlando's only team besides the Magic that could be called "major league."

Utah: 2012 Jazz.  Salt Lake City has never had a major league team in any other sport.

New Orleans: 2011 Saints and Pelicans.  The city has never had an MLB or NHL team.

Hamilton: 2011 Tiger-Cats.  The last major hockey team the city had was the 1925 Tigers, who finished first in the NHL, but refused to compete in the Stanley Cup Playoffs unless they were paid, and had their franchise revoked.

Portland: 2011 Trail Blazers.  Aside from the WFL's Storm and the USFL's Breakers, the city has never had any other teams.

Carolina (counting Charlotte and Raleigh) 2010 Hornets, 2009 Hurricanes, 2008 Panthers.  Neither North nor South Carolina has ever had an MLB team.

San Diego: 2009 Chargers, 2006 Padres.  The Clippers never made the Playoffs in San Diego.  While the city has never had an NHL team, the Mariners made the Playoffs all 3 years they were in the WHA, lastly in 1977.

Columbus: 2009 Blue Jackets.  The Columbus Bullies won the title in the 1940-41 version of the American Football League, but that's as close as Ohio's capital has come to even winning a postseason round at the major league level.

Birmingham: They've never had a team in MLB, the NBA or the NHL, but the 1984 and 1985 Stallions made the USFL Playoffs, and the Americans won the one and only World Bowl in 1974.

Honolulu: Only team ever that could possibly be called "major league" was the WFL's Hawaiians, who made that league's Playoffs in 1974.
Posted by Uncle Mike at 3:29 PM