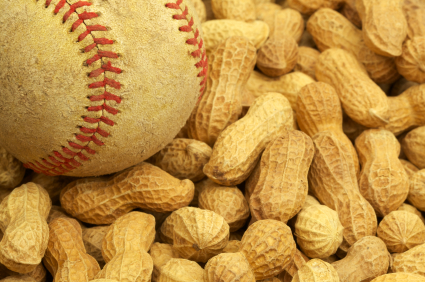 The game begins in the spring, when everything else begins again. And it blossoms in the summer, filling the afternoons and evenings. And then, as soon as the chill rains come, it stops, and leaves you to face the fall all alone.

You count on it, rely on it to buffer the passage of time, to keep the memory of sunshine and high skies alive. And then, just when the days are all twilight, when you need it most, it stops.

Man, that's sadder words than "Game called on account of rain." At least then, they make it up to you. But when a season is over, well, even Yogi Berra can't deny that it's over.

A. Bartlett Giamatti, then President of Yale University and a classical scholar, but not yet President of the National League or Commissioner of Baseball, wrote those words on October 2, 1977, after the Yankees once again edged the Boston Red Sox for first place. And that was a year before the Bucky Dent Game, the Boston Tie Party, thus making Bart less a philosopher and more a prophet.

Baseball hasn't broken my heart for a while. It has, however, continuously since 1977, the 1st season I can remember with any reliability, driven me nuts. And if you think the game of baseball isn't designed to drive you nuts, I refer to yesterday's regular season finale between the Yankees and the Houston Astros.

First of all, the Yankees were playing the Astros. You grew up with certain truths, and among them were "The Houston Astros are in the National League," and "The Yankees do not play National League teams except in spring training and, hopefully, the World Series."

The Astros lost their last 15 games this season, the longest season-ending losing streak in over 100 years. They lost 111 games, 324 over the last 3 years. That's insane. If they were an English soccer team, they'd have dropped from the Premier League to League One by now.

Meanwhile, the Yankees won 85 games. They finished in a tie for 3rd place in the American League Eastern Division, 12 games out of 1st, 6 games out of the 2nd AL Wild Card berth.

But we are the New York Yankees. We expect more.

And, to make matters worse, this season of emotion, little of it good, would not end. The game went 14 innings before the Yankees scored 4 runs in top of the 14th, including a home run by Mark Reynolds, to win, 5-1.

During the game, Yankee Fans experienced something Met fans usually experience in June: "For God's sake, get this game, get this season, over with already!"

* We will never see either Mariano Rivera or Andy Pettitte in a Yankee uniform again, except on Old-Timers' Day.

* The end of Derek Jeter's career can be seen without binoculars.

* The future of Alex Rodriguez is a big fat question mark.

* Robinson Cano's contract has run out, and we don't know if the Yankees will re-sign him.

* Mark Teixeira may never be the same, due to injury.

* CC Sabathia didn't look much like an ace this year.

* Phil Hughes looks like he should be on his way out, because he pitched as if he should be.

* We don't even know for sure if Joe Girardi is returning as manager -- and many of us are undecided as to whether he should.

* A lot of us, perhaps a majority, are convinced Brian Cashman should go.

* Indeed, of the usual starting lineup of Title 27, and the 5-man rotation we had, and the top 2 relievers, only the following are likely to be factors for us in 2014: Jeter and Brett Gardner. And that was only 4 years ago. (David Robertson was not yet one of the top two relievers, and Ivan Nova hadn't yet reached the majors.)

The future? The Yankees begin play again, also in Houston, on April 1, 2014. The 1st home game of the next season will be 6 days later, against the Baltimore Orioles.

To put up another Yogi quote, "In baseball, you don't know nothin'." How true, how true.

Baseball drives you nuts. If it wasn't designed to drive you nuts, it sure has worked out that way.