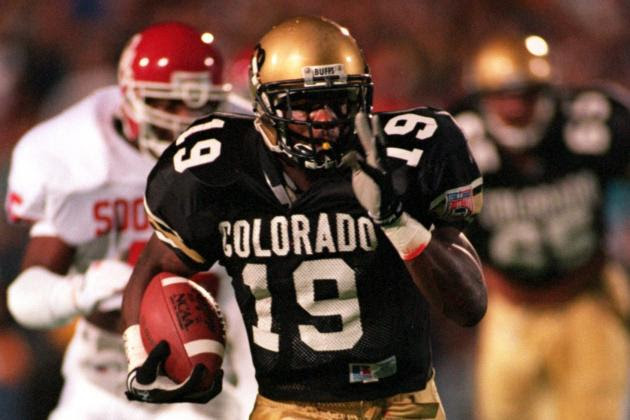 Rashaan Iman Salaam was born on October 8, 1974 in San Diego. That was his birth name. It was his father, a running back who played 1 game for the expansion Cincinnati Bengals in 1968, who was a professional athlete who, like Cassius Clay becoming Muhammad Ali, or Lew Alcindor becoming Kareem Abdul-Jabbar, converted to Islam and took an Arabic name: Teddy Washington became Sulton Salaam.

Rashaan attended La Jolla Country Day School in the San Diego suburbs, and, like his father, the University of Colorado, in the Denver suburb of Boulder. In 1994, Colorado went 11-1, thanks to Salaam scoring 24 touchdown and becoming only the 4th college football player to rush for over 2,000 yards in a season, including a school record 362 yards of total offense in a 34-31 win over Texas in Austin.

"He was very coachable," said his head coach, Bill McCartney. "He had a happy heart. I loved being around him. He didn't take himself too seriously, and he always credited those around him, especially his offensive line. What I liked about him is that he had a sparkle in his eye. He was upbeat and positive." High praise indeed from McCartney, a very evangelical Christian, to Salaam, a practicing Muslim.

As big as his performance that season was, Salaam wasn't involved in the team's signature play: Kordell Stewart threw a desperation pass that was caught for a touchdown by Michael Westbrook, beating Michigan in Ann Arbor 27-26. It became known as the Miracle at Michigan.

A loss to Nebraska kept the Buffaloes from winning the Big Eight, let alone the National, Championship, as the Cornhuskers won both. But Salaam was awarded the Heisman Trophy, becoming the 1st Colorado player to receive it.

(The previous closest call was running back Byron "Whizzer" White, runner-up to Clint Frank of Yale in 1937, and also a basketball star. He married the daughter of the school's president, played for Pittsburgh and Detroit, became a Rhodes Scholar, was awarded 2 Bronze Stars as a Navy Lieutenant in World War II, went to law school, worked in the U.S. Department of Justice under his longtime friends John and Robert Kennedy, and served 31 years on the U.S. Supreme Court.)

Salaam declared himself eligible for the NFL Draft a year early, and was taken by the Chicago Bears. At first, it looked like he would join the tradition of great Bear runners: Red Grange, Bronko Nagurski, Willie Galimore, Gale Sayers, Walter Payton. In his rookie season, 1995, he rushed for 1,074 yards and 10 touchdowns. At the age of 21 years and 77 days, he became, and remains, the youngest player to rush for over 1,000 yards in an NFL season. So far, so good. 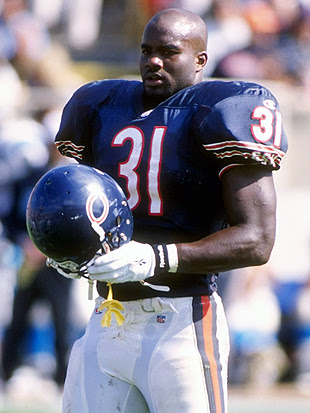 But things went downhill. He partied hard, and smoked marijuana, perhaps paving the way for the 1998 Heisman winner, Ricky Williams of Texas. He fumbled a lot. He also had injuries. He rushed for only 608 yards in 1996 and 1997 combined.

The Bears cut him. He did not play in the 1998 season. He was signed by the reborn, expansion Cleveland Browns in 1999, but he played just 2 games for the worst team in the League. Despite attempts to catch on with Oakland, Green Bay, San Francisco, Detroit, and the Toronto Argonauts of the Canadian Football League, his only pro experience after the '99 Browns was with the Memphis Maniax of the XFL in 2001. His last bid for a pro contract ended in 2004, at age 30, for a total of 33 NFL appearances, 1,684 rushing yards, and 13 touchdowns.

In a 1999 interview for ESPN, he said of marijuana, "It probably had me out there lackadaisical, instead of going out there 100 percent. Everybody thinks getting high is cool, you can let it go when you want to let it go. But it's just as potent as cocaine."

"I had all the talent in the world," he said in a 2012 interview with the Chicago Tribune. "You know: Great body, great genes. But I had no work ethic, and I had no discipline. The better you get, the harder you have to work. The better I got, the lazier I got. Work on your game.

After playing in the NFL, he marketed mixed martial arts in China. He continued to be involved with the Colorado football program, and was named the grand marshal of the 2014 Homecoming Parade. 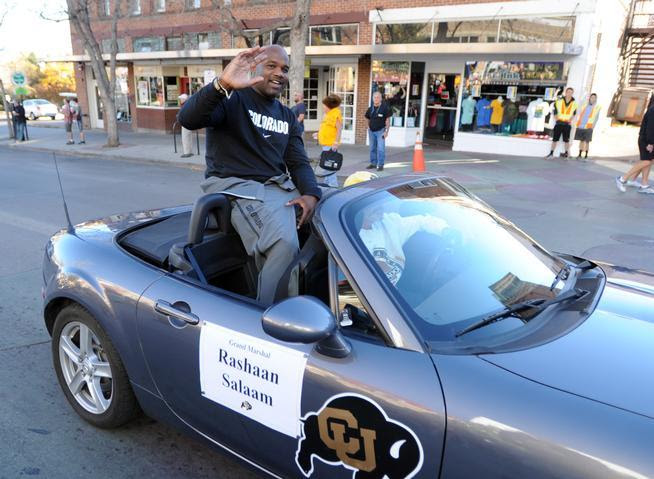 Yesterday, Rashaan Salaam was found dead in a park in Boulder, Colorado, just 2 miles from the University's Folsom Field. He was only 42 years old.

As of this writing, the authorities were saying there was no sign of foul play, and that what may have been a suicide note was found. Perhaps he is yet another victim of football-induced head trauma and resultant brain dysfunction and other physical difficulties.

The last post on his Facebook page, dated November 27, includes a video of Stevie Wonder, Luther Vandross, Whitney Houston and Dionne Warwick singing the song "That's What Friends Are For." In the post, Salaam noted he was "feeling joyful," and told people, as the song does, to "keep smiling."

Is that a sign that he wasn't suicidal? Or was it a plea for help?

UPDATE: The cause of death was found to be a gunshot wound to the head, and a tox-screen came back positive for 3 times the legal driving limit for alcohol, and for THC, the psychotropic ingredient in marijuana. Since the family was Muslim, they forbade an autopsy, so we may never know if he was suffering from football-related brain damage. He was buried at Mountain View Memorial Park in Boulder, Colorado.

Until yesterday, every Heisman Trophy winner from 1962 onward, and a few before then, was still alive:

The 2016 winner will be announced this coming Saturday. Most likely, a moment of silence will be held at the ceremony, for Salaam, and for Johnny Lattner, the 1953 winner from Notre Dame, who died this past February.
Posted by Uncle Mike at 10:07 PM