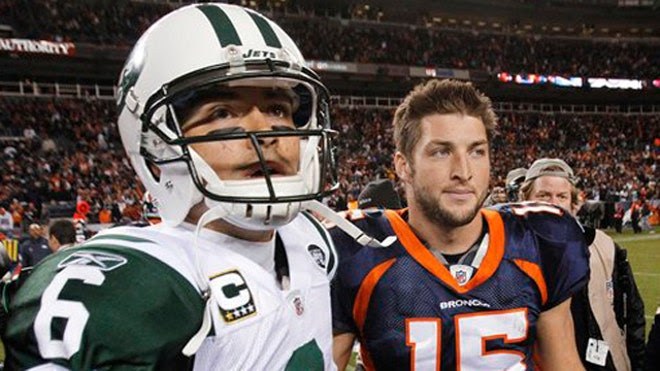 But now, neither Sanchez (who is just 26 years old) nor Tebow (a year younger) seems to be good enough to be the starting quarterback for the New York Jets.

He's a 24-year-old righthander, born in Los Angeles, who played high school football in the Dallas area while his father, a former quarterback at the University of Hawaii, worked in the front office for the Cowboys. On the team at Carroll Senior High School in Southlake, he was stuck behind Chase Daniel until his senior year. (Daniel went on to star at the University of Missouri, and is now Drew Brees' backup on the New Orleans Saints.) But in that senior year, McElroy led them to a 16-0 season and a State Championship, and was named the State's Player of the Year.

He went to the University of Alabama, and here's what he did in the 2009 season: Knocked off Virginia Tech, then ranked Number 5 in the nation, with a 2nd-half comeback; beat Number 22 South Carolina; beat Ole Miss in front of the biggest crowd ever to attend a sporting event in the State of Mississippi; dethroned Number 1 Florida with a performance that earned him the game's MVP, despite sustaining two cracked ribs; and beat Texas to win the National Championship.

His senior year wasn't quite as good, as Heisman Trophy winner Cam Newton led Auburn past Alabama and knocked the Crimson Tide out of contention for another SEC title. But he was named a National Football Foundation scholar-athlete, so he wasn't one of these guys who went to a big school just to play football.

The Jets drafted him in the 7th round in 2011. In his 1st year, he was available for the entire season, and took a grand total of zero snaps. In his NFL career to date, he has made 1 appearance, throwing 5 passes -- 1 of which was a touchdown to Jeff Cumberland for the Jets' only score in a 7-6 "win" over the suddenly-pathetic Arizona Cardinals on December 2.

Which certainly suggests that McElroy deserves as much of a chance as the Jets have given Sanchez -- and more of one than they've given Tebow.

So the era of "The Sanchize" appears to be over. And the Tebow Experiment hasn't even been tried. And there's a rumor going around that, A, the Jets are shopping Sanchez; and, 2, Tebow has asked to be traded. (In that other kind of football, this would be called "putting in a transfer request.")

So Sanchez may go, Tebow probably will go, and Ryan should go.

But, until Ryan does go, Tebow remains the bigger story. Not since George W. Bush went on vacation in August 2001, ignoring a certain memo about Osama bin Laden, has a man generated as much publicity for doing nothing as has Tim Tebow.

Only, in Tebow's case, it isn't really his fault. Whether he deserves to be a starting quarterback in the NFL is a discussion worth having -- and, from what I've seen, he seems to be a decent enough person, but not a quarterback good enough to start at the NFL level.

But, support him or not, I think we can all agree that he didn't deserve what's happened to him with the J, E, T, S, Jets, Jets, Jets.

To the tune of "No Particular Place to Go" by Chuck Berry (which sounds a lot like one of Chuck's earlier hits, "School Day"):

Riding along to the Mile High.
He can be their post-John Elway guy.
He stole the money, Brian Griese.
As good as his dad, he'd never be.
Cruisin' to Denver, Colorado.
To that particular place, Tebow.
Riding along, and he is for real.
He beat those Pittsburgh men of Steel.
His passing yards were 316.
Like the Scripture said, know what I mean?
But then got slaughtered in Foxboro.
So it's no particular place, Tebow.
No particular place, Tebow.
So off to New York, the kid did go.
The streets of the City are paved with gold.
And the Sanchez losses are getting old.
Can you imagine the way he felt?
Stuck to the bench like he's in seatbelt!
Sitting along in the Meadowlands!
Sanchez can't keep the ball in hands!
But Timmy won't be Rex's boy!
Passed over for who? Greg McElroy?
A bunch of Jet minds that are working slow!
It's no particular place, Tebow!
Posted by Uncle Mike at 10:36 AM