Scores On This Historic Day: April 15, 1989, The Hillsborough Disaster 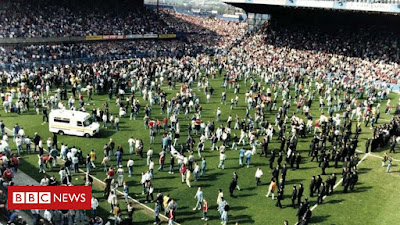 April 15, 1989: A terrible mistake in opening the wrong gate leads to the deaths of 96 people, and injuries to hundreds of others, at Hillsborough Stadium in Sheffield, England, at the start of an FA Cup Semifinal, on neutral ground, between soccer teams Liverpool and Nottingham Forest. Most of those hurt were Liverpool fans.
The game was abandoned 6 minutes in, at 3:06 PM -- 10:06 AM U.S. Eastern Time, hence the time of this post.
All English football matches were postponed for 2 weeks. On May 1, a "Bank Holiday Monday," every player across the country wore black armbands for matches, and a minute's silence was held before every kickoff.
The other Semifinal featured "the Blue Club in Liverpool," Everton, playing Norfolk team Norwich City at Villa Park, home of Aston Villa, in Birmingham in the West Midlands. Everton won, 1-0 on a goal by Pat Nevin.
On that tragic Saturday, there were 6 games played in the Football League's Division One:
* Arsenal defeated Newcastle United, 1-0 at the Arsenal Stadium, a.k.a. Highbury, in North London. Brian Marwood scored the goal for Arsenal, but recalls that the crowd was subdued, as some fans in the stands had transistor radios, and were getting reports that something had happened at Hillsborough, and the death toll was going up, and up, and up.
* The other North London team, Tottenham Hotspur, went to South London, and beat Wimbledon 2-1 at Plough Lane.
* Southampton beat West Ham United, 2-1 at the Boleyn Ground in East London.
* Derby County beat Manchester United, 2-0 at Old Trafford. This was not as big an upset as it looks now. At the time, it wasn't an upset at all: Derby would finish 5th in the League, Man U 11th.
* Luton Town and Coventry City played to a 2-2 draw at Kenilworth Road in Luton, Bedfordshire.
* And Queens Park Rangers and Middlesbrough played to a 0-0 draw at Loftus Road in West London.
The Hillsborough Semifinal was replayed on May 7, at Old Trafford, home of Manchester United. Liverpool won, 3-1, with John Aldridge scoring twice.
The Final was played as scheduled on May 20, at the old Wembley Stadium in West London. As in 1986, it was an All-Merseyside Final. As in 1986, it was still possible for Liverpool to win both the Football League and the FA Cup, also known as "doing The Double." Aldridge scored 4 minutes into the game, and it looked like Liverpool's "Double" was on. But Stuart McCall scored for Everton in the 89th minute, and the game went to extra time.
McCall scored again, but Ian Rush scored twice, and Liverpool won, 3-2. They had a glorious consolation for their misery.
The Liverpool-Arsenal match, scheduled for Liverpool's home of Anfield on April 22, was postponed to Friday night, May 26 -- and it turned out to be the League title-decider. When the Arsenal players came onto the pitch, they were holding bouquets of flowers, and each player in the starting XI ran toward the stands and gave his bouquet to a fan.

With the tiebreakers requiring Arsenal to win by 2 goals, at a stadium where they hadn't won at all in 15 years, to win the League title (and deny Liverpool the Double), they did just that, with Michael Thomas' goal in the 2nd minute of 2nd-half stoppage time giving Arsenal the most dramatic title in League history.

True, Liverpool fans did have the FA Cup, so they didn't exit the season empty-handed. But after all the death and destruction, and the lies and humiliation from the media and their own government, this defeat was another blow to their collective psyche.

The disaster happened 6 months before the Loma Prieta Earthquake interrupted the 1989 World Series in San Francisco. The much-maligned Candlestick Park held, protecting 60,000 people, although 63 people died around the San Francisco Bay Area.
*
In North American sports on April 15, 1989:
* The New York Yankees were supposed to play the Minnesota Twins at the original Yankee Stadium, but the game was rained out. It was rescheduled as the opener of a twi-night doubleheader (those were a thing, once) on August 2 -- the 10th Anniversary of another tragedy, the death of Thurman Munson -- and the Yankees won, 7-6. Bob Green hit a home run, and Lance McCullers, whose son Lance Jr. would later drive the Yankees crazy, was the winning pitcher, in relief of Dave LaPoint.
* The New York Mets lost to the St. Louis Cardinals, 3-2 in 10 innings at Busch Memorial Stadium in St. Louis. Pedro Guerrero hit a walkoff single against Don Aase.
* The Philadelphia Phillies were supposed to host the Chicago Cubs at Veterans Stadium. Like Yankees vs. Twins, this was rained out, and rescheduled as the opener of a twi-night doubleheader. On July 31, the Cubs won, 10-2.
* The Baltimore Orioles beat the Boston Red Sox, 12-4 at Fenway Park in Boston.
* The Kansas City Royals beat the Toronto Blue Jays, 10-5 at Exhibition Stadium in Toronto.
* The Pittsburgh Pirates beat the Montreal Expos, 6-4 at Three Rivers Stadium in Pittsburgh.
* The Texas Rangers beat the Detroit Tigers, 4-1 at Tiger Stadium in Detroit.
* The Chicago White Sox beat the Oakland Athletics, 7-4 at Comiskey Park in Chicago.
* The Milwaukee Brewers beat the Cleveland Indians, 5-1 at Milwaukee County Stadium. Eight days earlier, the film Major League premiered, featuring a fictionalized version of the Indians, with County Stadium serving as a stand-up for Cleveland Municipal Stadium. Hence, real-life Brewers broadcaster Bob Uecker playing fictional Indians broadcaster Harry Doyle.
* The Cincinnati Reds beat the San Diego Padres, 6-3 in 10 innings, at Jack Murphy Stadium in San Diego.
* The Los Angeles Dodgers beat the Houston Astros, 3-1 at Dodger Stadium in Los Angeles.
* The San Francisco Giants beat the Atlanta Braves, 1-0 at Candlestick Park in San Francisco.
* And the California Angels beat the Seattle Mariners, 9-2 at the Kingdome in Seattle.
*
There were 2 Stanley Cup Playoff series that were decided in a Game 7 on this day. An overtime goal by Joel Otto gave the Calgary Flames a 4-3 win over the Vancouver Canucks at the Saddledome in Calgary.
And Wayne Gretzky led his new team, the Los Angeles Kings, to a 6-3 win over his former team, the defending Stanley Cup Champions, the Edmonton Oilers, at what was then known as the Great Western Forum, in the Los Angeles suburb of Inglewood, California.
There were 7 games, all regular-season, played in the NBA that day:
* The Atlanta Hawks beat the Milwaukee Bucks, 125-100 at The Omni in Atlanta.
* The Indiana Pacers beat the Charlotte Hornets, 115-105 at the Market Square Arena in Indianapolis. Chuck Person scored 37 points for the Pacers.
* The Sacramento Kings beat the Golden State Warriors, 114-110 at the Oakland Coliseum Arena.
* The Phoenix Suns beat the San Antonio Spurs, 137-91 at the Arizona Veterans Memorial Coliseum in Phoenix. Tom Chambers led all NBA scorers for the night, with 38 for the Suns.
* The Los Angeles Clippers beat the Los Angeles Lakers, 119-107, at the Clippers' home, the Los Angeles Memorial Sports Arena, which had been the Lakers' home before the Forum opened.
* The Utah Jazz beat the Portland Trail Blazers, 99-95 at the Portland Memorial Coliseum.
* And the Seattle SuperSonics beat the Denver Nuggets, 125-92 at the Seattle Center Coliseum. Dale Ellis scored 32 for the Sonics.
Posted by Uncle Mike at 10:06 AM