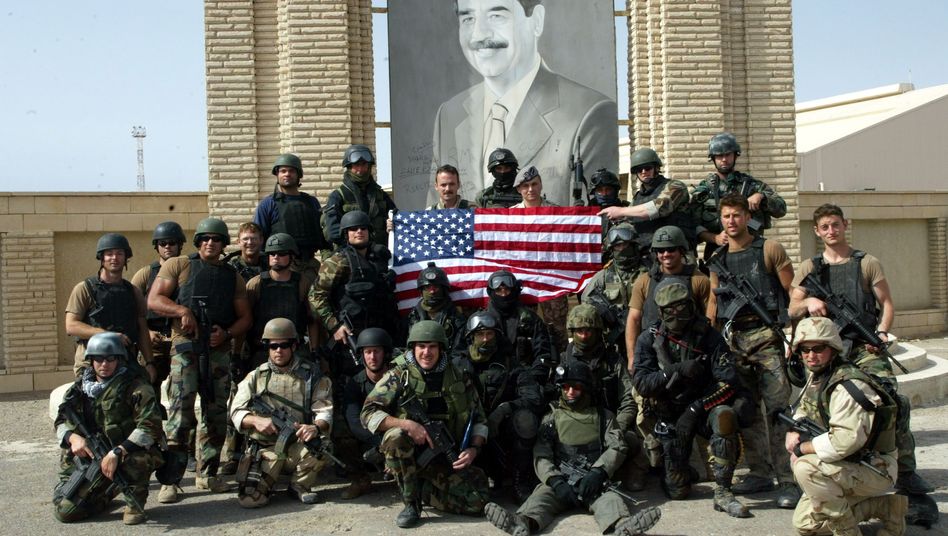 March 20, 2003: President George W. Bush launches the Iraq War, to topple President Saddam Hussein of Iraq from power.
April 9, 2003: Saddam fled, his regime of nearly 34 years coming to an end.
May 1, 2003: Aboard the aircraft carrier USS Abraham Lincoln, beneath a huge banner reading "MISSION ACCOMPLISHED," Bush did not use those words himself, but he did say, "Major combat operations in Iraq have ended. In the battle of Iraq, the United States and our allies have prevailed."
To be fair, he added, "We have difficult work to do in Iraq. We are bringing order to parts of that country that remain dangerous. Our mission continues."
December 13, 2003: Allied forces captured Saddam. But this was not the end of the war, either.
September 30, 2004: With the war still going, with no end in sight, Bush was running for re-election, and debating the Democratic nominee for President, Senator John Kerry of Massachusetts, at the University of Miami in Coral Gables, Florida. Bush was asked why he started the war.
He said, "The enemy attacked us." This was part of his continuing telling of the story that Saddam was involved in the terrorist attacks on September 11, 2001, including the destruction of the World Trade Center in New York.
Kerry responded: "Saddam Hussein did not attack us on September 11, 2001. Osama bin Laden did."
Kerry was right. Bush was lying. That should have ended Bush's bid for a 2nd term right there.
November 2, 2004: By a margin of one State in the Electoral College -- and we may never know just how much the Republicans cheated in Ohio, possibly in other States -- Bush was re-elected.
January 20, 2009: Bush leaves office as one of the most unpopular Presidents ever, and Barack Obama becomes President. He had been elected partly on a pledge to end the Iraq War, which was still going.
June 1, 2009: Dick Cheney, who from 2001 to 2009 had been Bush's Vice President, finally admitted the truth: "I do not believe and have never seen any evidence to confirm that [Hussein] was involved in 9/11. We had that reporting for a while, [but] eventually it turned out not to be true," Cheney conceded.
December 18, 2011: President Obama withdraws the last U.S. combat forces from Iraq, leaving behind only a token force in a defensive role. There were 4,507 American soldiers killed, among 32,000 wounded. Other countries' forces in support, including the new Iraqi army: 18,000. Pro-Saddam and later ISIS forces killed: Approximately 37,000. Iraqi civilians killed: Officially, over 110,000, but probably far more.
Benefits to Iraq: They traded one corrupt regime for another, with far fewer extrajudicial killings. In other words, things became better, but still not good.
Benefits to America: The Bush-Cheney Administration's friends, especially energy companies and defense contractors, made a lot of money, and... uh... well... America remembered that war is a bad thing, and that just because you spout slogans and wave flags doesn't make you more patriotic than the people who say that war is a bad thing.
March 20, 2003 was a Thursday. Major League Baseball was in Spring Training, so any games played in that sport on that day didn't count. The NFL was in its off-season. There were 3 NBA games played that night:
* The Detroit Pistons beat the Philadelphia 76ers, 113-85 at the Palace in the Detroit suburb of Auburn Hills, Michigan. Chauncey Billups of the Pistons led all scorers with 29 points.
* The San Antonio Spurs beat the Dallas Mavericks, 112-110 in overtime at the American Airlines Center in Dallas. Nick Van Exel scored 35 for the Mavs, but Tim Duncan scored 25 for the Spurs, and Malik Rose and Tony Parker each added 22. The Spurs went on to win the NBA Championship.
* And the Sacramento Kings beat the Los Angeles Lakers 107-99 at the Arco Arena in Sacramento. Kobe Bryant scored 34 for the Lakers, and Shaquille O'Neal scored 28. But the Kings got 26 from Chris Webber, 23 from Peja Stojakovic, and 19 from Mike Bibby, riding a 41-point 4th quarter to victory.
There were 9 games played in the NHL, and 4 of them went to overtime:
* The only team in the New York Tri-State Area playing that night was the New York Islanders, and they beat the Montreal Canadiens, 6-3 at the Bell Centre in Montreal.
* The Philadelphia Flyers beat the Pittsburgh Penguins, 4-2 at the Philadelphia arena now named the Wells Fargo Center.
* The Columbus Blue Jackets beat the Toronto Maple Leafs, 4-3 in overtime at the Nationwide Arena in Columbus.
* The St. Louis Blues beat the team then known as the Mighty Ducks of Anaheim, 3-2 in overtime at the St. Louis arena now named the Enterprise Center.
* The Colorado Avalanche beat the San Jose Sharks, 2-0 at the Denver arena now named the Ball Arena.
* The team then known as the Phoenix Coyotes beat the Edmonton Oilers, 3-2 in overtime at what is currently named the Phoenix Suns Arena in downtown Phoenix.
* The Tampa Bay Lightning and the Los Angeles Kings played to a 2-2 tie, in overtime at the Staples Center in Los Angeles.
* The Washington Capitals beat the Calgary Flames, 4-1 at the Saddledome in Calgary.
* And the Vancouver Canucks beat the Nashville Predators, 7-3 at what's now named the Rogers Arena in Vancouver.
Posted by Uncle Mike at 12:00 AM